Would-be buyers are packing open houses and scrambling to make offers on properties before they are even listed. Bidding wars are erupting. And real estate agents are vying fiercely to represent the few sellers that do exist.

Housing inventory has sunk to levels not seen since the bubble years. The number of American homes with a “for sale” sign hit 2.5 million in April, the lowest number for an April since 2006, according to the National Assn. of Realtors. 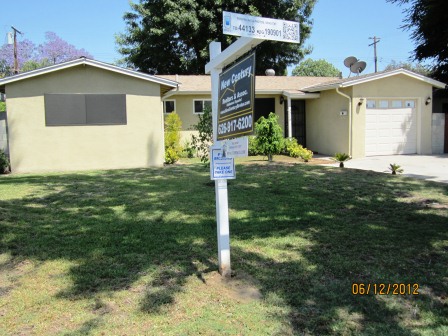 David Dennick, who lives in Echo Park and works as a television editor, has been searching for a home with his wife, Denise, for about two months. The couple have already bid on three properties. They are hoping to find a home for less than $525,000, which is $25,000 more than they originally had hoped to spend.

“It is much more competitive than we thought,” said Dennick, standing in the entrance of an Eagle Rock open house on a recent Sunday. “It is just frustrating because we thought we would really be able to buy a house; we are a middle-class family.”

The sharp drop in inventory along with rock-bottom interest rates have helped stabilize even some of the hardest-hit markets, including the Southland, Las Vegas, Phoenix and Miami. Some real estate professionals are concerned that the lack of inventory might turn off potential buyers, stifling the recent recovery in home sales.

The much-predicted foreclosure wave that was expected to dump more homes onto the market has not materialized. Fewer borrowers are entering default, and banks are better managing the properties they do have on their books.

In addition, professional investors bankrolled by private equity firms and hedge funds are pouncing on bank-owned homes, often turning them into rentals.

A dearth of new construction also is constraining supply. In April — the most recent month for which figures are available — the number of completed new single-family homes available for sale stood at 46,000, the lowest level since the Census Bureau began keeping track in 1973. Some 70,000 were under construction, also near historic lows.

The inventory problem has been exacerbated by the plunge in home prices since the go-go years. Many people who bought at the top of the cycle are so deeply underwater, they can’t get the price they need to sell and are therefore not bothering to put their homes on the market.

“We know negative equity holds back home sales, but it also holds back the listing of sales,” said Sam Khater, an economist with CoreLogic, a company that tracks the mortgage market. “Today it is holding the market back.”

The lack of available homes is maddening for those consumers who thought 2012 would be the year to buy.

In Southern California, inventories have plunged over the last year. The number of homes listed for sale in April fell 35% in Los Angeles County and was down 42% in Orange, 39% in San Bernardino, 42% in Riverside, 53% in Ventura and 43% in San Diego counties, according to online brokerage Redfin.

Eddie David and his wife, Tiana Rezac, have felt the unexpected shortage firsthand. The two were sure they would buy a house this year until they tripped into the perplexing new housing reality. After being outbid on three different properties in neighborhoods from the Westside to Atwater Village, they shelved the search.

“With the downturn, it seems like there are a lot of people who have been waiting in the wings to pounce, and because the rates are low, there is just a lot more competition,” David said. “There were multiple offers. We tried to get in on a couple other homes, and even though it had been just a week or two weeks, it was just too late.”

Alex Gruenberg and his wife, Kristina, both 27, lost out on a home that ended up going for $30,000 more than they offered. The recently married couple have new jobs in the area and are looking for a pedestrian-friendly neighborhood with decent dining options.

They are now trying to find homes before they are listed.

“We are really learning that there is sort of an inside element to that,” Gruenberg said. “Things are going in days.”

Glenn Kelman, chief executive of Redfin, said the recovery remains tentative but the market has grown competitive because sellers feel they have time on their side, while buyers feel a sense of urgency given low interest rates and relatively cheap prices compared with the bubble years.

“It is a precarious situation, but the real issue is that nobody wants to sell a house right now,” Kelman said. “So now we have classes for our real estate agents on how to win a bidding war.”

Kelman suggests trying to tour the home when the seller is present and working with a local lender who might know the listing agent personally.

Also important is having enough cash to make up the difference between the negotiated price and whatever the appraised value of the home turns out to be, he said. (Lenders won’t provide a mortgage for more than a home’s appraised value.) Many deals these days are falling apart because appraisals are coming in low, given how many recent comparable sales have been foreclosures or other distressed properties.

“The appraisal is blowing up the deal half the time,” he said.

Mike Glickman, a Los Angeles real estate agent, has a strategy to win clients. He offers sellers a choice: He’ll give them a $1,000 gift certificate to any store of their choosing simply for listing a property with him or he will cut his commission to 0.5% instead of the more typical 6%.

“There is an incredible shortage of houses on the market right now, and I haven’t seen a fever like this for houses in like maybe 10 years,” Glickman said. “If anything priced within reason comes on the market, there are six or seven or 10 offers.”

Frank Casarez, an agent with Coldwell Banker, said he is experiencing a crush of buyers for the foreclosed homes that he lists for banks.

“There is such a high buyer demand,” Casarez said. “Even with the economy the way that it is, with job losses, there are quite a few people who thrive on this setting, who have been saving for a long time and have been saving to get a deal on the property.”

In fact, real estate agents are so eager for more homes on the market that they are enlisting members of Congress to push back against a federal plan to auction off huge pools of government-owned properties to be converted into rentals.

Phil Jones, a member of the California Assn. of Realtors’ Distressed Property Task Force, said that bankers who meet with the group “have a very systematic plan to distribute these homes on the market.”

The market for bank-owned homes — known as real estate owned — has gotten so competitive that longtime foreclosure king Leo Nordine has decided to try selling regular homes now, declaring: “REO is kind of over.”

He recently opened a new office in Watts.

“There are some properties that are getting foreclosed, but there are some big funds that are coming over … and they are literally just bidding them all up,” Nordine said. “There is a lack of inventory, even in South L.A.”